The MOJO Diver Bluebill has an ultra realistic paint scheme that presents finer detail and holds its color. Also, with the magnetically attached wings, this decoy is more realistic, quieter, smoother, faster and have longer battery life.

Engineered as they should be, following the concept used in motorised vehicles. All working components are installed into a solid structural housing which is rigidly attached to the support pole. Then, a completely independent flexible decoy body is placed around that housing. This helps keep the noise of the motor to a minimum and also reduces the shake of the decoy itself. Other models which do not have a separate structure have too much noise from the motor and too much shake from the movement.

The MOJO Diver Bluebill has an ultra-realistic paint scheme that presents finer detail and holds its colour. Also, with the magnetically attached wings, this decoy is more realistic, quieter, smoother, faster and has longer battery life.

The decoy comes equipped with flexible feet attached to the decoy skin. This makes them easy to handle for storage and portability. 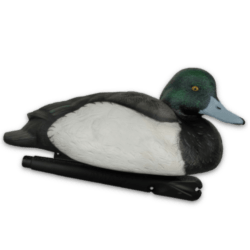 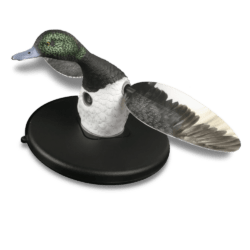